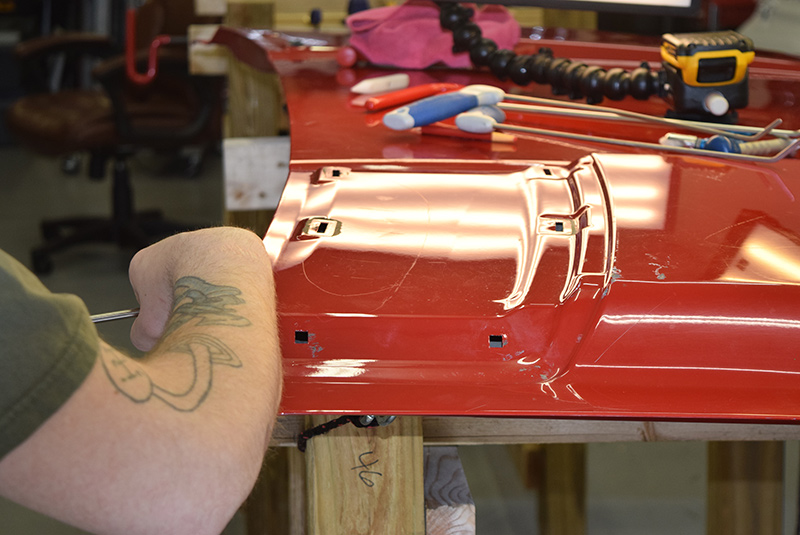 I have gone into body shop across the country over the last 18 years. I have seen many sets of abandoned PDR tools sitting on shelves or in corners of collision repair centers. I have heard all of the reasons technicians give why paintless dent repair could not be learned. Why they have been unable to learn PDR by themselves? As a seasoned PDR Industry master trainer for 16 years, I see 4 main reasons body shop technicians need help learning PDR.

What’s Been Tried And Failed

Body Shop managers, owners, and individual technicians have bought the PDR tools. The technicians have watched the PDR training videos or YouTube videos. They expected to learn these PDR skills. They may even have gone to a training “mill” out in California or hired a PDR technician to “train” PDR. Yet, the tools sit in the back of the shop or on a shelf never to be used again. Everyone gives the sad story of not being able to learn PDR. If any group should be able to learn and perform PDR, it is the collision repair industry.

I come from a teaching family and have taught various subjects over the years. As an example, I have taught golf since I was 12 years old. Part of my family’s gift is to look at systems and processes to understand how they work. Then, If need be, fine tune or fix them. Paintless dent repair is no different. For years, I have instructing students, many body shop techs, and their success has come from learning and mastering these four areas. Also, I have seen how improper understanding and implementation of any one of these components usually leads to failure. The only analogy that I can compare it to is a four-legged stool. A broken leg leads to an unusable stool. Likewise, any weak component of the four leads to failure. Thus, tools collecting dust.

The technicians are learning PDR theory from DVD’s produced in the 1990’s that come with most tool kits. These videos are so bad that, back in the day, we were told by the PDR masters to forget everything from the videos. But, not all videos are bad. An Example is Dent Trainer videos are good supplementary background or reinforcement training.
YouTube

YouTube has been a major source of trying to learn PDR. Again, most videos are not produced by actual instructors, and they teaching PDR theory from years ago. Even some current trainers I have caught on YouTube speaking old PDR theory but performing current PDR theory. Plus, the difficulty with videos as a training tool is the difficulty of learning 3-dimensional theory from a 2-dimensional source. The two-dimensional training aids of videos only give you part of the picture. Compounded to the confusion is a 2-minute video showing a repair taking hours to perform by a master technician. Wow, it looks so easy…Not! Videos have their place but not for initial training.

The PDR “Mill” schools out of California, Ding King, Rightlook, and Superior Auto Institute, use teach PDR theory from the early 90s. Even the Ding King current promo video they send out was from the 90s and the dent guy on the video is retired! The reason why they are still teaching “old school” theory is that they are marketing companies not paintless dent repair companies. They have no connection with the PDR industry. The owners are not PDR master techs or PDR master instructors. They do not have them on their staff. . They are companies just selling a product/service. So, they do not know any different. They are clueless to how PDR theory a short time ago and why. So, they continue to teach old PDR theory and their students continue to fail. I understand this because I retain many of their students.

All the Industry PDR trainers all know each other. It’s a very small cadre of master instructors. We usually are together once a year sharing the latest PDR industry trends to implement into our training. This year we are implementing the new 3D lenses for our LED lights in the training environment. A major assistance for students. Do the “mill’ trainers implement innovation in their training? No, they are not even at the table!

The DIY system of learning lasts roughly three days. A tech watches the videos then gets the tools out, sets up a training stand, and then makes some dents. Three days later, the tech is pulling his hair out, throwing tools, and usually gives up. Some of the more determined ones make it a little longer but the results are the same. The tools go on a shelf, the video disappears in a drawer or in a desk, and the tech goes back to bodywork.

Why? Because the act of performing paintless dent repair skills is very unnatural. The PDR skills and body movements, most of the time, are fighting against natural body movements. Plus, you are using and putting extreme pressure on muscle groups that are rarely used.

A coach must be present to assist the student in proper form and skill development. He must be present, over the shoulder, and guiding the movements of students while they are learning PDR skills. As the body wants to avoid PDR movements, He is there to retrain and redirect the student to perform PDR efficient body movements. This is critical the first week of training. Most DYI PDR students throw down the tools at this stage and give up and walk away! You need a coach to learn PDR!
Understanding Proper Equipment

Tools are a big part of performing PDR. You can have the other three components, but if the tools are inferior, then PDR fails. Most sets that I have seen on body shop shelves over the years have been inferior. Lack of knowledge and cost of quality tools has resulted in poor tool purchases that reinforce the body shop tech PDR failure rate. Below are two sets of PDR tools marketed by Auto Body Toolmart. This catalog is in most body shops. Both are inferior, of low quality, and antiquated designs. The 55 piece set is an early 1990s designed and not user-friendly in with current PDR theory. The DentFix 33 piece set is totally unusable! The Chinese took pictures of old tools and then over-exaggerated the tool sizes and thickness to compensate for poor quality metal. Even the PDR tools sold of the Snap-On trucks are of poor quality. No PDR techs are going to buy Snap-On PDR tools.

Only high-quality spring or stainless steel that is heat-treated can withstand the torque and pressure we put on PDR tools to push dents out. PDR tools made with Inferior material bend and are not usable. Along with poor materials is the tool designs being out of date. But, body shops are buying these sets not knowing good from the bad.

There are only a handful PDR tool companies and only known in the PDR industry circles. An example of high-quality PDR tools set that many technicians own, including myself, a Master Craftsman, is the A-1 PDR tool 53 piece premium toolset. The price for this PDR industry manufactured set is $1145.00. The inferior Auto Body Toolmart set is $1499.96. So, price is not the issue, its knowledge of quality tools. We use tools from the 5 major manufactures in class and extensively train all aspects of PDR tools and equipment. Just as an aside, don’t go to a trainer who forces you to buy their tools. Learn about them first and make an informed tool purchase.

Learning the PDR “Feel” is like a body man developing his “Feel”. The body man “Feels” the exterior couture of a panel examining the surface to check for and repair damage. Both are not learned overnight! But, for years technicians, managers, and owners have misunderstood the PDR mindset and learning curve. For the most part, body technicians work from the exterior of a panel. The frustrating part of PDR is the aspect of working from behind the panel while viewing from the exterior in a reflection. A complete opposite change in mindset. A proper PDR “feel” and mindset is only developed thru repetition. Expectations need to adjust to a longer learning curve. We can teach the PDR mindset in a very short period of time. But for it to become a habit, just like the body man touch, much longer.

The solution is to get repetitions fixing dents. This must be focused time with no distractions. Most quality trainers will recommend two weeks or longer with a dedicated trainer. Typically, nobody wants to take the time or expense for more than a week. Individuals not from the collision repair industry I refuse to train under a two-week time period. Why? It takes at least two weeks of pushing dents for proper muscle memory to develop! If the “feel” is not developed then the time and money were all wasted.

The bottom line is that deficiency in any one of these components leads to PDR learning failure. Body Shop Technicians need help learning PDR to get all these components correct. In my opinion, a good PDR industry master instructor is what is required to become successful at PDR. Do your research into PDR training. I have a guide to choosing PDR training which you can follow to assist in choosing quality training. I am not saying you have to come to my training. There are a few other trainers out there that will set you on the path of success. I can give you their names since I know all of them. The point is…get quality hands-on PDR training!